I’m chopping my Yule log in preparation for the Christmas holiday. Let the snow come. I will be snug next to the fire with all my new toys. I may even build a snowman.
Bubba is enjoying California Christmas. No snow where he is and yes, the roses are blooming.
Have a Merry Christmas and a Happy New Year
From Bubba, Rick, and Spider

Bubba is all ready for Christmas but still has one thing to do . . . visit the guy in the red suit . . . Santa.

I chopped down the tree and put up the ornaments, but I also had to give Santa my Christmas list.  Some say the idea of a jolly fat man who gives out toys to good children is all just fantasy.  Some may also say that the idea of a small plastic person who travels the world is also pure nonsense, but that does occur now and then.

First, I had to locate him.  Where does Santa hang out when he is not at the North Pole?  Why at the mall of course.  So off I went to the mall.  I saw a long line of children in front of guy in a red suit sitting in a chair.  I joined the line but, as I got closer, I could see something was amiss.  This person’s belly looked suspiciously like a pad under his coat.  His boots were just shiny black pieces sewn on the bottom of his pants and wait … he scratched his beard and it moved to the side!  As I got closer, I saw a cranky elf taking money from each kid as he or she approached.  This was Santa Gansta, holding up the kids for cash!!  I hopped out of line and started to leave when a guy in green leggings and a knit cap pulled low to disguise pointy ears approached me.

“I noticed,” I replied, “The real Santa doesn’t take money, he gives joy.  I wish I knew where to find him”

The elfin figure shifted and I heard the sound of bells as bent down to whisper in my ear.  “The real Santa is at the Jelly Belly factory.”

Could this be?  I had to find out right away so I made my way to the big bean making place.

Inside was a sugar dream.  It was the birthplace of Jelly Bellies.

I ran up to the information booth and asked the nice lady if she knew where Santa was hiding out.  She told me he hadn’t arrived yet but she suggested that I sign in and take the tour.

This was more like it!  Finally I found someone with proper Christmas cheer.  I signed in and was given a hat to wear.

It was going to be a little too big so, given the fact that I have no hair on my pointy head, I was allowed to catch a ride on someone else’s hat.

I learned how a Jelly Belly is made and at the end of the tour was given a free sample.

I asked for another sample and was given a few.  These people know the true meaning of Christmas Spirit!! 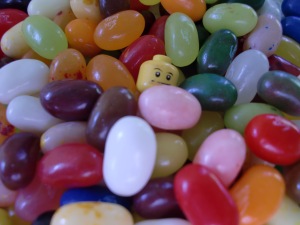 All of a sudden I heard the clatter of hooves and the jingle of bells.  Even though it was a bright sunny day, a flurry of snow engulfed the room and I saw Santa scurrying up to his chair.

I ran up the stairs and there he was!  The jolly old elf, Santa Claus!!!!  I could tell this was the real deal.  No polyester beard or foam padding.  This was Santa, with a genuine smile to cheer the hearts of all.

He held me up to his ear so I could whisper my toy requests.

He listened to everything I had on my list and checked it twice.  I confessed to the naughty, but he already knew about the nice.  He let me hang out on his hat to ask for one more item (I guess a couple of my jelly beans got stuck on there, too). 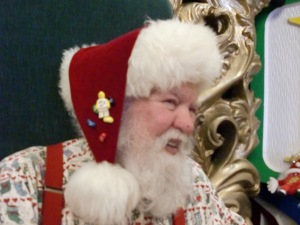 This year I found my voice.  I was lucky enough to be given a home with some nice people and saw some wonderful things.  Life has given us its ups and downs but, all in all, our life is good.  I asked Santa to please smile on those whose lives are not so nice and give them a New Year of happiness.

Merry Christmas from Bubba and his Friends. 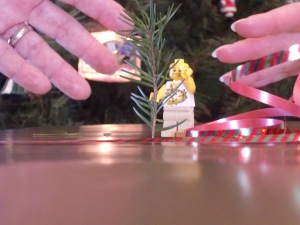 Bubba Gets Ready For Christmas

We will pause in Bubba’s account of his travels on Route 66 to reflect on his preparation for the upcoming Christmas celebration.

I am ready for the Christmas blitz.  The first thing I wanted to do was put up a million lights around the house.  I got a big box down from the attic.  Last year they were all carefully wound, stored, and put away for the next year.  When I opened the box, I saw the mischievous elves had been at work and all the lights were in disarray.  I hear that happens in everyone’s house.  I jumped right in to untangle the mess. 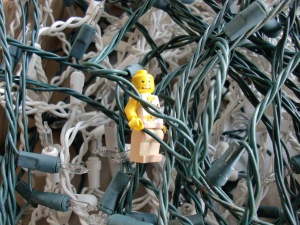 I then took my axe and headed out into the woods to chop down the traditional tree.  It was a little heavy and that sharp bit was not too pleasant.  It was cold so I put on a knit cap and found an axe.

I found the tree I was looking for and an axe I could really handle and started chopping.

After about twenty minutes of chopping, I managed to cut it down and drag it back home. 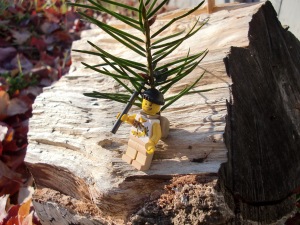 There was already a tree in the house and I walked around it meeting some interesting people. 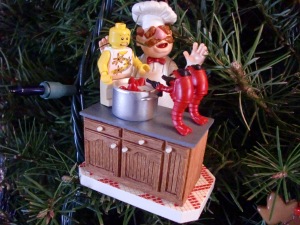 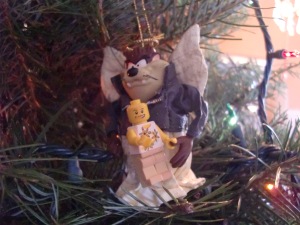 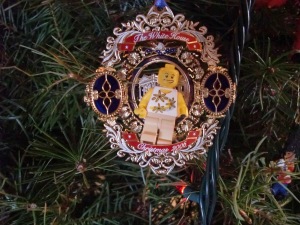 Next it was time to wrap presents.  I gathered wrapping paper, bows, and ribbon and set to work.  It took all day but I managed to make a neat and tidy package.

Maybe I can get a job as a professional wrapper.

Our next surprise for Bubba is a trip to see the big jolly guy in the red suit.