In the quest to always move east, we took a week out to roll around Belgium.  We are now back in Brussels for a last look before boarding a plane again.

AHHHHH!!  Don’t get wet.  I found out this is Manneken Pis.  A rather famous fountain to commemorate…there are several stories.  He has been standing there doing his bit since 1618 so his origins are faded.  The one I like best is the small boy who found a way to extinguish the fuse of a bomb and save the city.  This guy is famous.  He has a better wardrobe than most of us and his outfit is changed often.  There is even a special museum dedicated to his wardrobe and, of course, we visited.

Only some of his outfits are on display.  The rest are packed in drawers.

Do you like Elvis?  Well, Elvis is in the house. 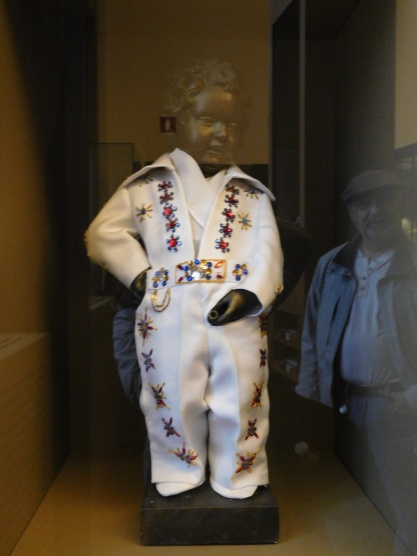 This is taken very seriously as he has been there for close to 500 years.  It is considered an honor for him to wear a costume and the submission process is quite complicated.  He has been given honors by several countries. 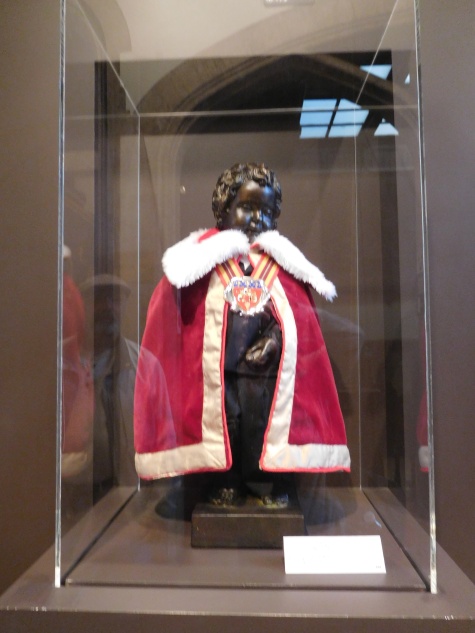 He is a great hero among us short inanimate people. Who else can attract a crowd with umbrellas to watch him go about his 500-year business.

Enough of this culture stuff.  Time to find an even more serious place to escape the rain.

A couple of pints later and I’m ready to go back out and see the sights.  We stopped at a shopping arcade.

Rick bought a snappy hat that looks like his other snappy hats.

We then stopped by the Cathedral des Saints Michael et Gudule.  I think the guard may have detected the previous pints as he pointed the way out.  Or at least one way out.

Must be time to board the first plane out to the east.

I wonder where this place may be?