To celebrate his 76th post, Bubba thought he would take a walk in his garden. 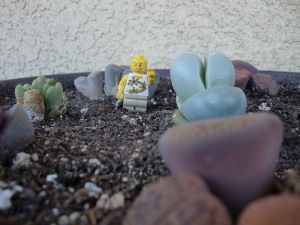 Bubba says this looked like an elephant had his head buried in the sand.  Bubba just had to see what was so interesting down there.

We last left Bubba at the end of his trip down the Mother Road, Route 66.  The trip took him a lot longer than he expected and he had to include side trips to Tucson, Arizona and Havana, Cuba.

It seemed to make sense at the time.  Now he is in California, celebrating the end of “The Road”.

Not too far from the official “West End of 66” sign is the Santa Monica Pier.  It looks like there a few things to do over there.

This is the famous sign on the famous pier.  I’ve gone as far as I can on this coast.

This was first built in 1909 or 1916 or maybe 1877.  It is in pretty good shape but you should still be careful.  It goes a long way out and falling off puts you smack into the Pacific Ocean.  But I am a world traveler. What could go wrong?

Good thing I’m a strong swimmer. Or at least a strong floater.  I’m the guy on the right.

I swam and floated for days and days.  The land was always just a little too far.  Eventually I ended up in a harbor.  A ship was cruising by.  If I give it one good try, I can get on board.

I made it!  Let’s see where this giant cruise ship will take me.

Ah, yes, back to the dock.  At least I am on land again.  I’m not sure what city this is.  I’ll take a walk up to those buildings.

I’ll ask at this place. 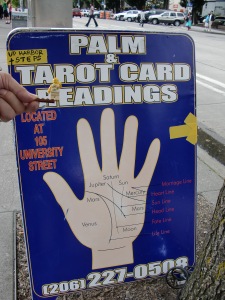 No luck.  My hand is too smooth and my head line is round and yellow.

There is a place I recognize.  I think I have seen one of these before.  This must be important since they tell you three times.  That should be a clue as to where I am.  I’ll just look at where these stores are located and it will narrow down the search.

Places with a Starbucks.  I could be anywhere except Bukhara, Uzbekistan or Perho. Finland.  That narrows it down.  Any more clues around?

A market.  Lots of places have a market.  This isn’t any help. 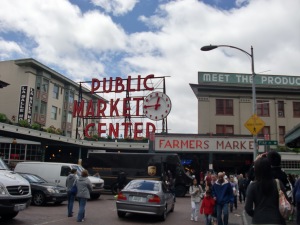 This is a pretty tall building.  In fact it looks like a needle sticking up into space.

Maybe if I go to the top and look around, I’ll be able to see where I am.

There is the city.  There is a dome type building that says “Safeco” on top.  I think there was a baseball team that lost a game to the magnificent Oakland A’s recently that played someplace called Safeco.  Having a team that is not as good as the A’s doesn’t narrow it down much.

Maybe these people can help.  They look…trustworthy?

Seaside, Safeco, Space needle, Starbucks, I must be in an “S” town.  Of course, I am in Sioux Falls… no wait, Seattle! That’s it! Seattle!