While looking at the big Barbie car, I noticed an intriguing establishment behind it. 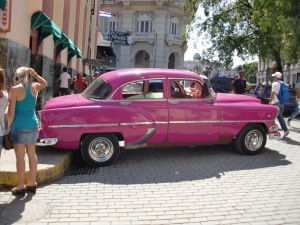 I’ve had experience with pubs in many lands and this had all the right vibes.  I’m not too sure what a Daiquiri is, and it is too bad that some hood sprayed his name on the side of the building, but I would give it a try.

I whispered a story in his ear about my trip to the Salton Sea.  He said he’d write about it and call it “The Old Man And The Sea”

Who are you calling an old man, old man?  He took me to another of his hangouts.  It was a pretty crowded place but he still managed to get us a drop to drink.  It might have been because Ernie’s picture was everywhere here.

Back at the Floridita, with a few more drinks dissolving my plastic innards, I started to feel an itching on my face.  Was I turning into Ernie Hemingway?

I thought I looked something like this Che guy I saw on the side of a wall.

A few more drinks, and a beret from Che, and I was having the party of my life.  Havana Club Rum and the local Tu Kola combined to be the drink of the moment.  Viva Tu Kola!! 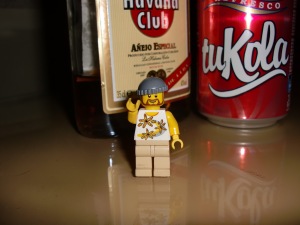 Ernie threw in a couple cigars.  They were pretty big, and fire and plastic aren’t always good friends, but the rum kind of offset common sense.  Salude!! 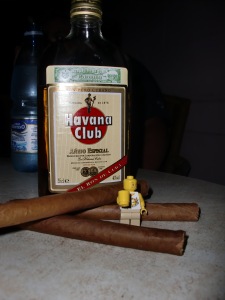 Ernie disappeared, saying something about hunting in Idaho.  It looked like I was on my own, and just a little impaired.  Things started getting a little blurry.  I understand I often look blurry in my pictures but, this time, I was seeing the blurry myself.  When I walked, there were little hurricanes swirling around my feet making the steps difficult.  Suddenly, the ground tilted and ….

Things were getting out of hand.  I had reached my limit with rum.  I knew what I had to do.  It was a hard choice but I had to do it for my own good.

I switched to beer.

Cuba has a wide variety of beers available; Cristal and Bucanero.  I dove right in…and was rescued immediately.  Luckily, I had befriended Hallie earlier in the trip.  She now saw me in peril and moved quickly to save me from further destruction.

She plucked me from my Bucanero diving platform and explained the evils of my ways.  I vowed to change my ways and to never repeat my bad behavior.  Until next time.

Now those cigars were intriguing…

Bubba, looking for a vacation in a cabana, ended up in Havana.

After my welcome drink mojito and a great lunch to go with it, I checked into my hotel.  We were staying at the Meliá Cohiba.  My window had a great view of the Malecón and the Galerias Paseo. 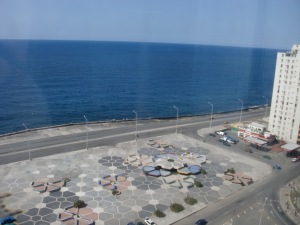 The big flower thing is a fountain that wasn’t working as it was under restoration.  I’ve always heard that Cuba has some wonderful cars.  It is true.  They don’t have a lot but they have some real classics.

Some of the best ones are taxis and some are painted like taxis but I dunno. 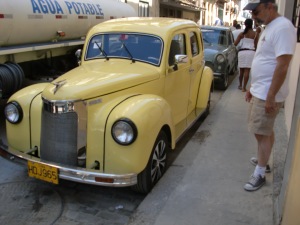 It is amazing what a coat of paint can do for a car.  Or to a car.

There is nothing like spending a day at the seaside in a convertible.

Then there were also these things.  They kind of reminded me of Ducklings.  The cars in the back look like something from Toon Town. 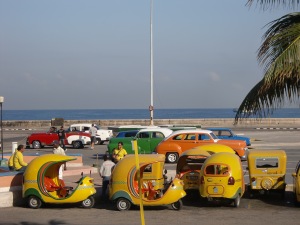 In the country, where motor vehicles are a little scarcer, the bus system is still crowded but a little more informal. 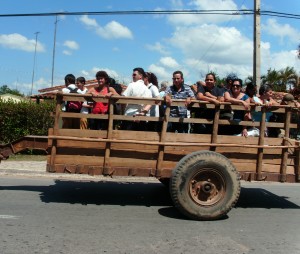 I think they call it the Country Area Rapid Transit or CART. 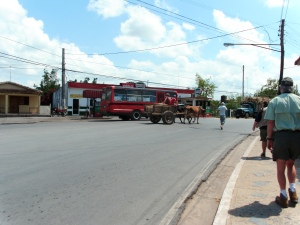 In any country you will always see those darn kids in their hot rods.

My friend, Kathy, decided to not wait for our transportation and took a local taxi back to our country hotel.

Many thanks to Marina and Spider for providing the pictures.